Subject: Revision of income criteria to exclude socially advanced persons/sections (Creamy Layer) from the purview of reservation for Other Backward Classes (OBCs)-reg.
The undersigned is directed to invite attention to this Department's Office Memorandum No. 36012/22/93-Estt. (SCT) dated 8th September, 1993 which, inter-alia, provided that sons and daughters of persons having gross annual income of ₹1 lakh or above for a period of three consecutive years would fall within the creamy layer and would not be entitled to get the benefit of reservation available to the Other Backward Classes. The aforesaid limit of income for determining the creamy layer status was subsequently raised to ₹ 2.5 lakh, ₹ 4.5 lakh and ₹ 6 lakh vide this Department's OM No. 36033/3/2004-Estt. (Res) dated 09.03.2004, OM No. 36033/3/2004-Estt. (Res) dated 14.10.2008 and OM No. 36033/1/2013-Estt. (Res) dated 27.05.2013 respectively.
2. It has now been decided to raise the income limit from ₹ 6 lakh to ₹ 8 lakh per annum for determining the creamy layer amongst the Other Backward Classes. Accordingly, the expression "₹ 6 lakh” under Category VI in the Schedule to this Department's aforesaid O.M. dated 8th September, 1993 would be substituted by "₹ 8 lakh".
3. The provisions of this office memorandum have effect from 1st September, 2017.
4. All the Ministries/Departments are requested to bring the contents of this office memorandum to the notice of all concerned.
Sd/-
(Debabrata Das)
Under Secretary to the Government of lndia 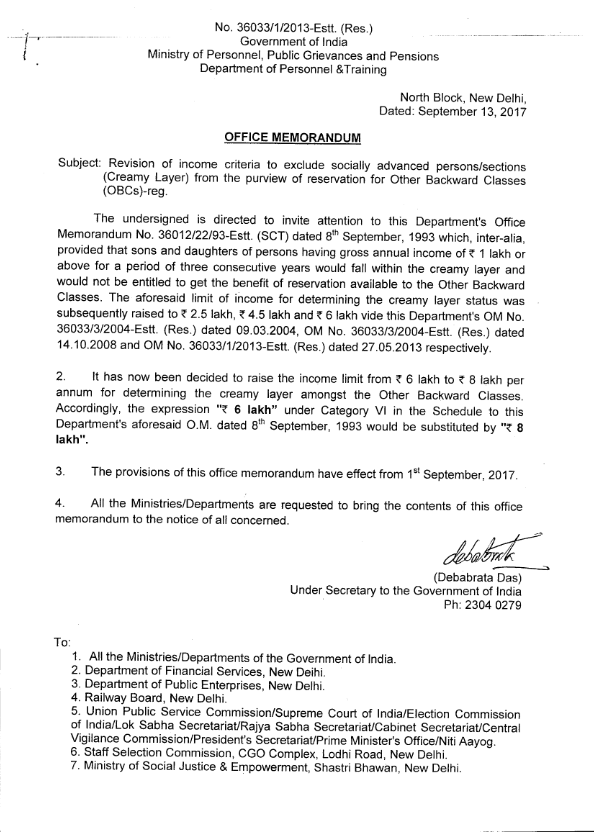