ALL INDIA POSTAL STENOGRAPHERS' ASSOCIATION
WISHES
A HAPPY AND PROSPEROUS NEW YEAR
2017
Posted by AIPSA at Saturday, December 31, 2016 No comments: 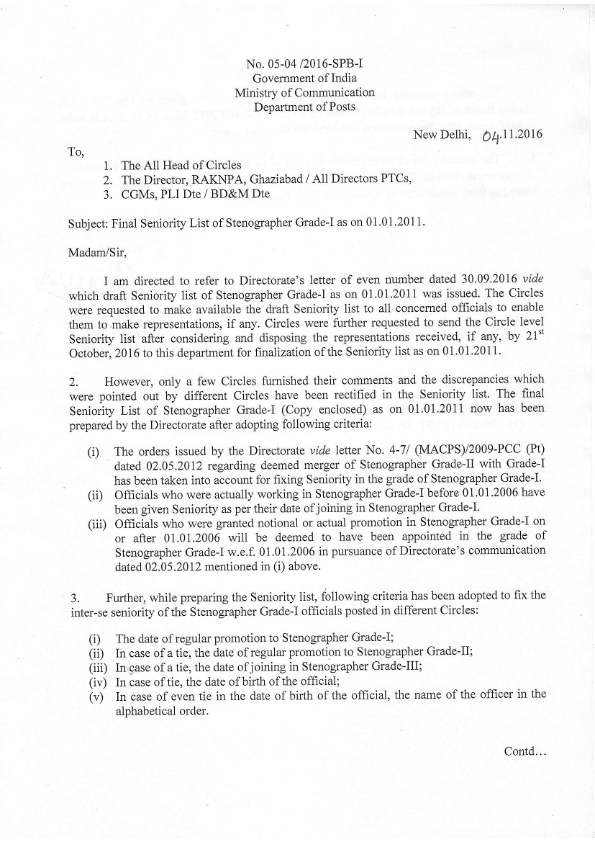 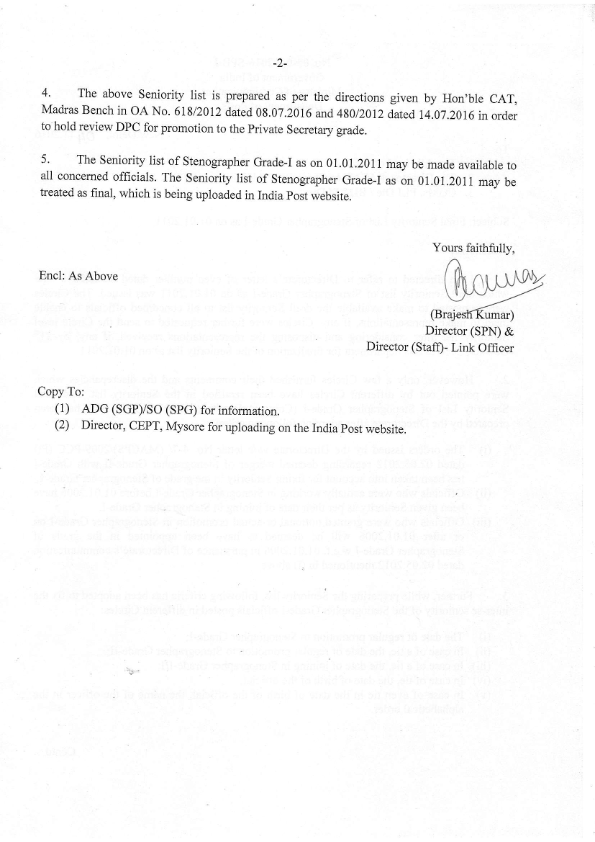 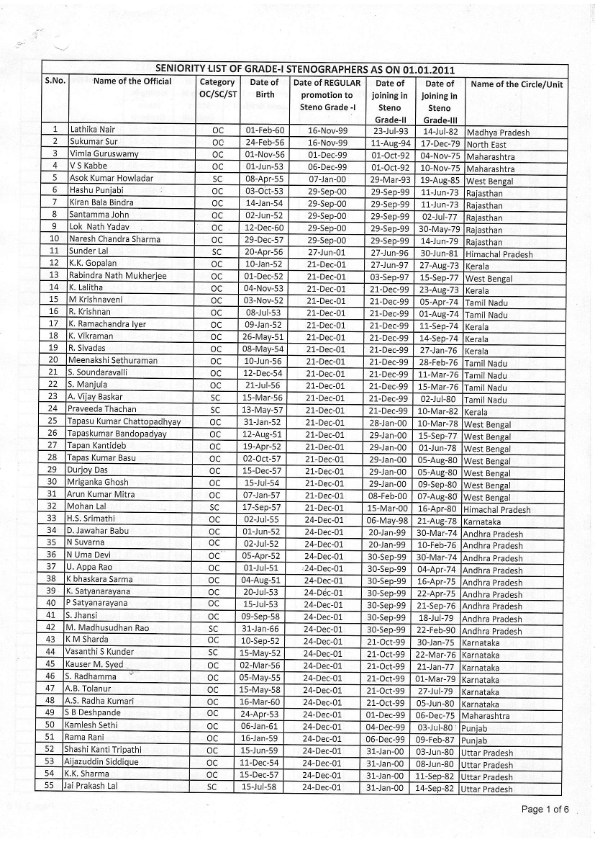 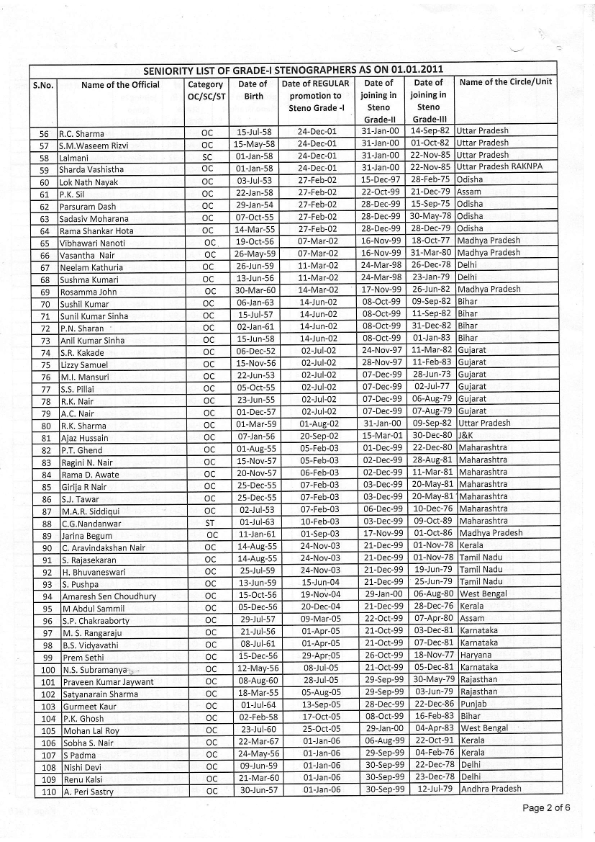 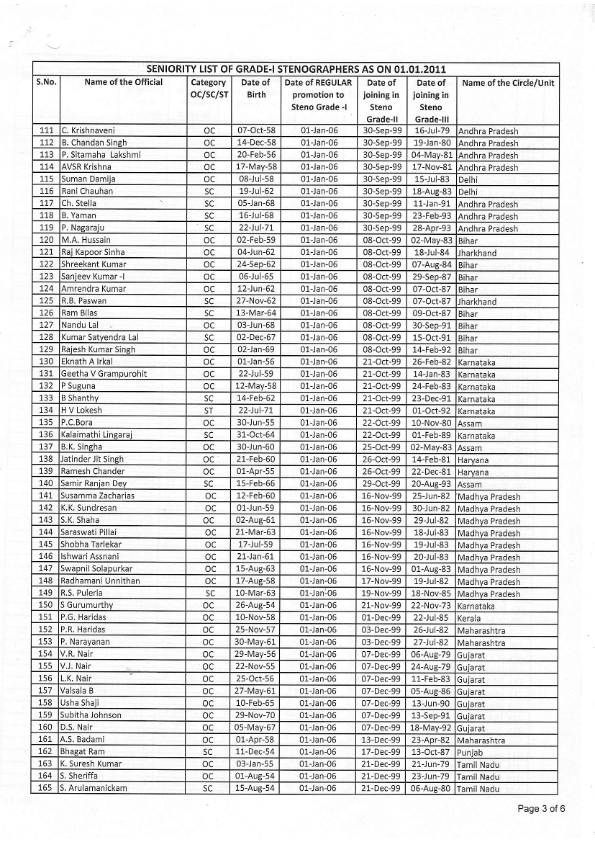 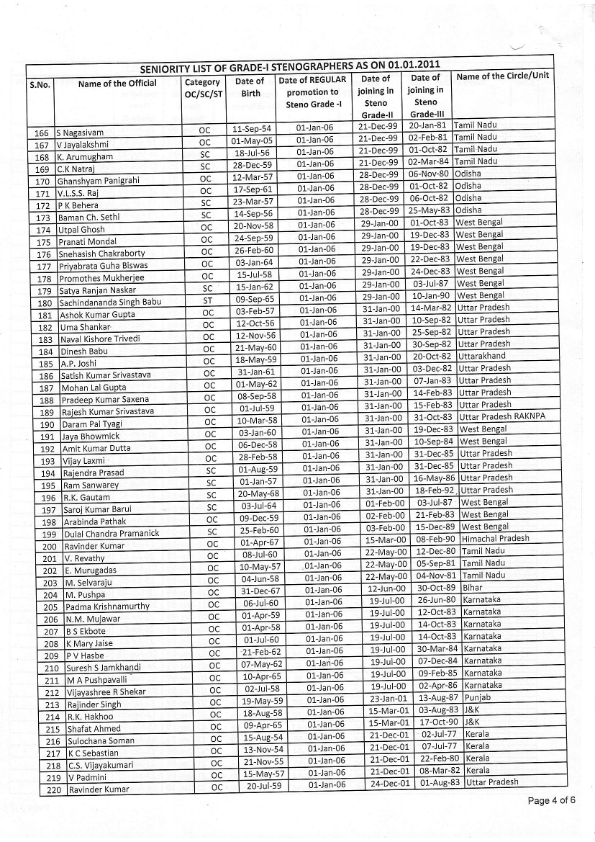 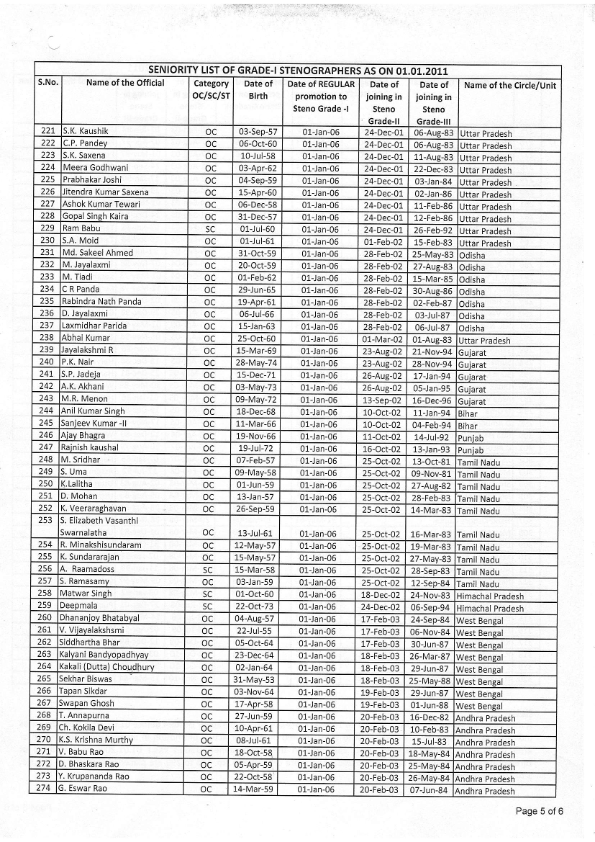 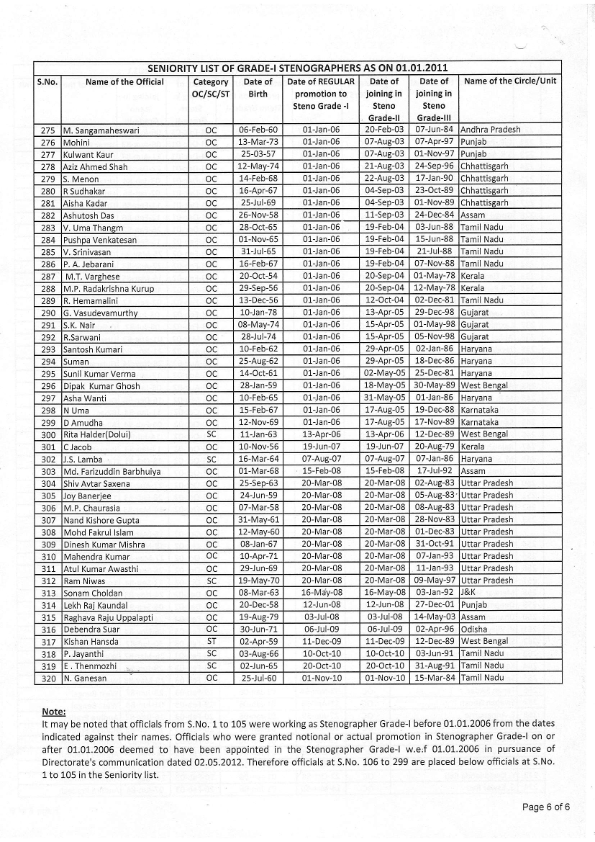 Click here to view the Directorate memo dated 29.12.2016 on the above subject matter.
Posted by AIPSA at Saturday, December 31, 2016 No comments:

Promotion to the grade of Director General Postal services in the Department of Posts.


Sri T.Murthy, Member(O), Postal services Board is promoted as Director General, Dept of Posts in place of Sri A.K.Tiwari retiring on 31.12.2016. 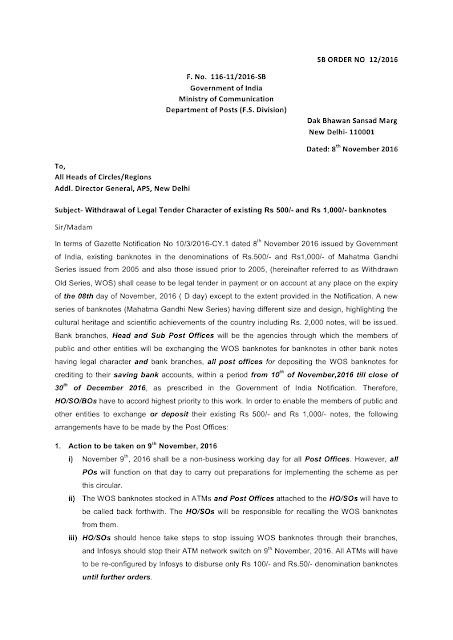 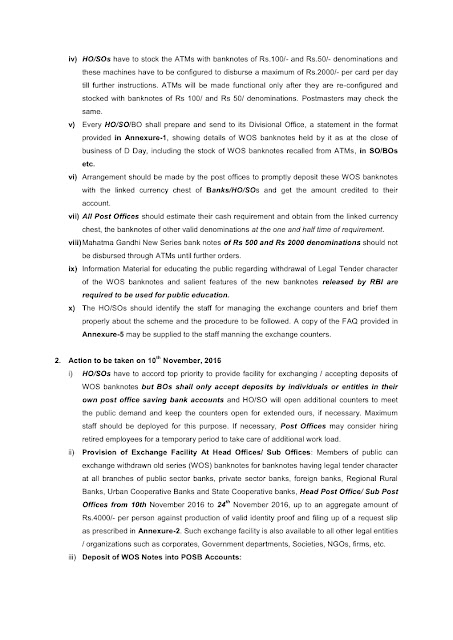 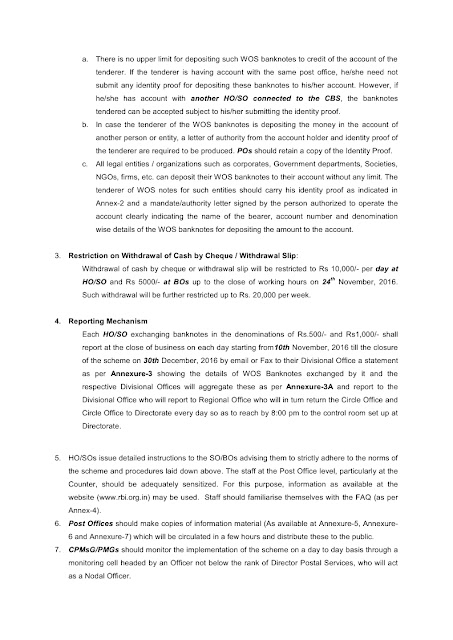 Clarification on withdrawal and acceptance of notice of Voluntary Retirement

Sir,
I am directed to state that this Department is proposing to insert provision for withdrawal and acceptance of notice of Voluntary Retirement in the All India Service (Death Cum Retirement Benefits) Rules, 1958 under Rules 16(2) as 16(2-B) and 16(2-C), as provided in the relevant rules of CCS(Pension) Rules, 1972 i.e. under Rule 48 & 48-A as under:
16(2-B) A notice of voluntary retirement given by a member of the service under subrule 2 and 2-A above, may be withdrawn by him, provided the request for such withdrawal shall be received within the intended date of his retirement by the Competent Authority.
16(2-C) Where a notice of voluntary retirement is given by a member of the service under sub-rule 2 above and the appointing authority does not refuse to grant the permission for retirement before the expiry of the period specified in the said notice, the retirement shall become effective from the date of expiry of the said period.
Provided that in cases, where no order is issued by the State Government, then after the expiry of the notice period, the Central Government may issue orders to give effect to this sub-rule.
2. All the State Governments/UTs are requested to convey their comments on the proposed amendments as required under Clause 3 of the AIS Act, 1951 latest 07/01/2017 positively. If no comments are received by the stipulated date, it would be assumed that the concerned States/UTs are in agreement with the proposed amendments.
Yours faithfully,
(Rajesh Kumar Yadav)
Under Secretary to Govt. of India
Source : http://darpg.gov.in/
Posted by AIPSA at Saturday, December 31, 2016 No comments: 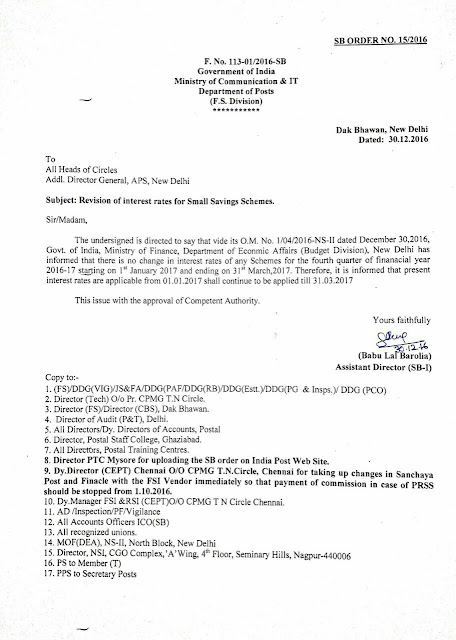 In continuation of trailing mails, please find attached the RBI notification no. DCM (Plg) No.2103/10.27.00/2016-17 dated December 30, 2016 regarding closure of the scheme of exchange of Specified Bank Notes (SBNs) at banks on December 30th 2016. In this connection, following instructions are issued:
1. All Circle/Regional Level control rooms to continue till further orders.
2. With the closure of the facility of deposit of SBNs (WOS banknotes) as at the close of business on December 30, 2016, all Circles should submit a consolidated report (from 10.11.2016 to 30.12.206)in Annexure 3D in addition to the daily reports of today (30.12.2016), to control Room Directorate.
3. The Post Offices which are linked to the Bank Branches having currency chest should deposit SBNs/WOS banknotes by December 31, 2016.
4. SBNs (WOS banknotes) cannot form part of Post Offices cash balances from the close of business as on December 31, 2016.
5. Necessary action may be taken to deposit WOS banknotes today itself in linked banks.
With regards,
Sachin Kishore
Director (CBS) 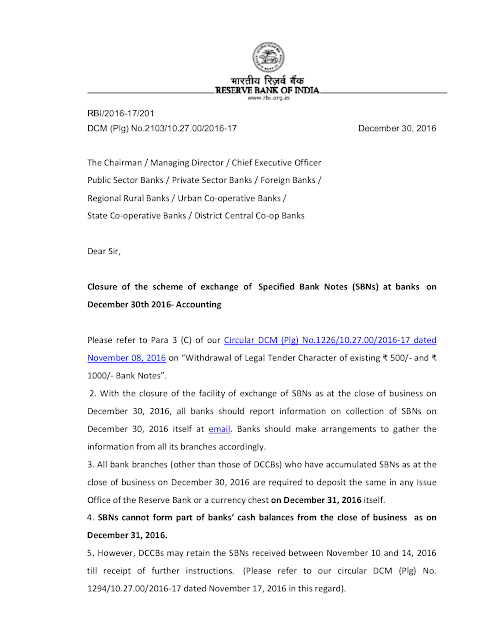 Promulgation of the Specified Bank Notes (Cessation of Liabilities) Ordinance, 2016

The President of India approves the Promulgation of the Specified Bank Notes (Cessation of Liabilities) Ordinance, 2016 today;
The President of India has approved the promulgation of the Specified Bank Notes (Cessation of Liabilities) Ordinance, 2016 today i.e. on 30th December, 2016.
The Ordinance is a follow-up to the decision taken by the Government of India to cancel the legal tender character of the existing series of banknotes, as on November 8, 2016, in the denominations of Rs.500 and Rs.1000 (Specified Bank Notes-SBNs) in circulation.
The main objectives of the Ordinance are (i) to provide clarity and finality to the liability of the Reserve Bank of India and the Government of India for the SBNs; (ii) to provide an opportunity to those persons who were unable to deposit the SBNs within the time provided; and (iii) to declare holding, transferring or receiving SBNs as illegal, with provisions for penalty for contravention of any of the provisions of the Ordinance.
This decision follows a number of steps taken to eliminate the menace of unaccounted money in the economy including setting up of a Special Investigation Team (SIT); enacting a law regarding undisclosed foreign income and assets; amending the Double Taxation Avoidance Agreements between India and Mauritius and India and Cyprus; reaching an understanding with Switzerland for getting information on Bank accounts held by Indians with HSBC; encouraging the use of non-cash and digital payments; amendments to the Benami Transactions Act; and implementation of the Income Declaration Scheme 2016. It is a move in line with the government’s initiatives to curb unaccounted money in the system, money laundering and tax avoidance.
As on 30th December, 2016 a part of the Specified Bank Notes (SBN) have come back to the Reserve Bank of India and these are now a part of the formal financial system, increasing the deposit base of the banks and improving their ability to lend. People have also embraced and are continuing to adopt different digital forms of payments. The ecosystem of digital payments infrastructure is continually being improved and strengthened to make it easier for more people to adapt to this form of payment.
As was notified on 8th November, 2016 those persons who were unable to exchange or deposit the SBNs in their bank accounts on or before 30th December, 2016 shall be given an opportunity to do so. Accordingly, this facility has been granted to all Indian citizens who were outside India from 9th November, 2016 to 30th December, 2016 to tender these SBNs at the specified Issue Offices of RBI until 31st March, 2017. For those citizens of India who are not resident in India, this facility would be available till June 30, 2017 in order to allow them adequate time to plan a visit as per their convenience.
The above facility would be subject to the regulations of the notification “Foreign Exchange Management (Export and Import of Currency) Regulations, 2015. As per these Regulations bringing back such currency into the country is restricted to Rs.25,000/- per person. Separate FEMA provisions are applicable to persons in Nepal and Bhutan which would continue to apply.
At the time of return to India the number and denominations of the SBN will need to be declared to the Customs authorities at the airports and other entry points. Necessary form for such declaration will be given out by the CBEC. The details of the declaration and statements that are required to be submitted along with the SBNs at the time of deposit in RBI Issue Offices will be separately announced by RBI. Any false declaration will invite a fine of Rs. 50,000 or five times the amount of the face value of the SBN tendered, whichever is higher.
After the period of exchange is over, the liabilities of the Reserve Bank and the guarantee of the Central Government towards the Specified Bank Notes will stand extinguished. Further, to prevent any continued parallel transactions with the SBNs by unscrupulous elements, after this period, holding, transferring and receiving SBNs will attract a fine of Rs.10,000 or five times the amount of the face value of the SBN involved in the contravention, whichever is higher.
Posted by AIPSA at Saturday, December 31, 2016 No comments:

2. On a review of the position, the daily limit of withdrawal from ATMs has been increased (within the overall weekly limits specified) with effect from January 01, 2017, from the existing ₹ 2500/- to ₹ 4500/- per day per card. There is no change in weekly withdrawal limits. Such disbursals should predominantly be in the denomination of ₹ 500.

Allotments and Postings in PS Group B cadre - AP Circle

Amendment in RRs for revising the upper age limit as 30 years for the recruitment made under Combined Graduate Level Examination conducted by SSC for the post carrying Grade Pay of Rs. 4200,4600 and 4800/-. 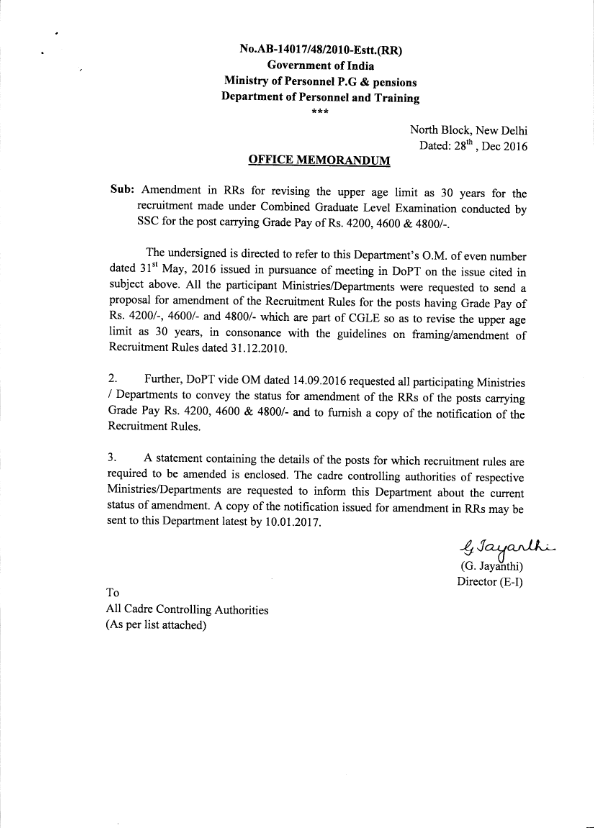 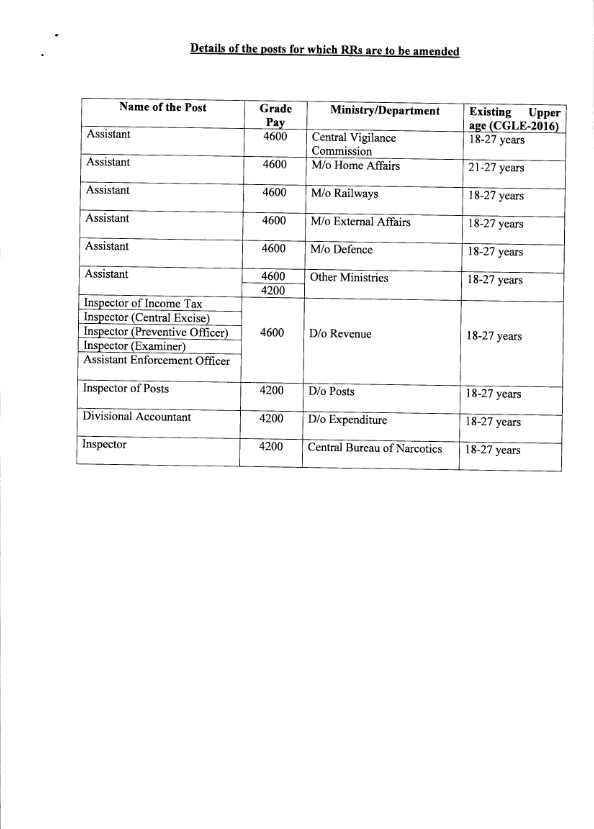 Frequently Asked Questions (FAQs) on withdrawal of Legal Tender Character of the Old Bank Notes in the denominations of Rs 500/- and Rs 1,000 and replies there to

Evidence of the wedding, including the invitation card, copies of receipts for advance payments already made, such as Marriage hall booking, advance payments to caterers, etc.
A detailed list of persons to whom the cash withdrawn is proposed to be paid, together with a declaration from such persons that they do not have a bank account, where the amount proposed to be paid is Rs 10,000/- or more. The list should indicate the purpose for which the proposed payments are being made.

The Cabinet on Wednesday approved promulgation of an ordinance to extinguish Reserve Bank of India's liability towards the Rs 500 and Rs 1000 notes that ceased to be a legal tender from November 8.
This ordinance would provide the legislative backing for the demonetisation exercise.
It will make necessary changes to the RBI Act to allow for extinguishing central bank's liability with regard to issued currency that has been cancelled.
All notes carry RBI's promise to pay the bearer the amount of the value of the currency and it requires a legal change to end this liability.
The ordinance also seeks to make possession of more than ten notes of Rs 500 or Rs 1000 a penal offence attracting a monetary fine that could Rs 10,000 or five times the cash held, whichever is higher, a government official said.
The ordinance will have to be sent to the President and after his assent will come into force.
Fresh guidelines would be issued for exchange of notes at RBI counters post December 30. Notes will be allowed to be deposited with select branches of RBI till March 31 in exceptional circumstances.
Source : http://economictimes.indiatimes.com
Posted by AIPSA at Friday, December 30, 2016 No comments: