Cadre Restructuring of Group 'C' employees in Department of Posts

Sub : Cadre Restructuring of Group ’C’ employees in Department of Posts.
D.G. Post letter No. 25-04/2012-PE-I dated 27th May, 2016.
The Cadre Restructuring of Group-C  employees of Department of Posts has been undertaken in consultation with Department of Expenditure , Ministry of Finance in pursuance of the approval concurrence of the Department  of Expenditure  vide ID No. 2(45)E.III Desk/2015 dated 12th May,2016 , a list at distribution of the posts containing the existing and revised posts  of Postal Assistants, Lower Selection  Grade, Higher Selection  Grade II & I and also a few HSG-I (Non-Functional Grade) is enclosed for implementation with the  following  instructions:
a)         The post of SPMs in Single  Handed  and Double Handed Post Offices  to the cadre of LSG posts (GP Rs.2800) shown in the  annexure now allotted to the Circle , will be placed in the Grade  Pay of Rs.2800/- in the Pay Band-I..

b)         The post of SPMs in Triple Handed Post Offices, in the extent of HSG-II  posts (GP4200) shown the annexure  now allotted  to the Circle and all other existing norms based LSG Posts in Post offices  will be placed in the Grade Pay of Rs.4200- in the Pay  Band-II. In no case, the total number of HSG-II posts shall exceed the number of posts allotted to the Circle.

C)        Existing  posts in HSG-II to the extent  of posts  now allotted  and shown in the annexure , will  be placed in the  Grade Pay of Rs.4600/- in the Pay  Band-II along with the existing  HSG-I Posts . Remaining HSG-II posts if any shall remain in the GP of Rs.4200 only. In no case, the total number of HSG-I posts shall exceed the number of posts allotted in the Circle.

d)         The Cadre Restructuring of these posts  are only in respect of the  posts from Postal Side  other  than the posts of RMS ., Circle and Regional Offices and SBCO Wings.

e)         If the revised number of posts is in excess of the existing strength of a particular grade the difference will be deemed as  newly sanctioned posts in that grade . Similarly, if the revised number of posts is in  a grade is less than the existing strength the number of posts equal to the difference  will be treated as having been  abolished in that grade.
f)         The vacancies arising out of the restructuring will be filled up only from the amongst the official who fulfill the eligibility criteria  laid down in the recruitment rules  for the post.
g)         The new HSG-I (Non Functional  Grade)  with the grade  pay of Rs.4800/- is only  for those  who  are  senior  most  and completed  not less than a minimum service of 2 years  in HSG-I  subject to the  number of posts specified  for the Circle  in HSG-I (Non Functional  Grade) (for example  the number of NFG officials in AP Circle should never  exceed (17) after following usual procedure of non functional upgradation(s).
2.         These instructions will be effective from the date of issue of the orders. The actual benefit would however be admissible to the eligible officials from the date of actual promotion.
3.         Receipt of the order may be acknowledged. Immediate action initiated and compliance report sent at the earliest.
Sd/-
(Tarun Mittal) 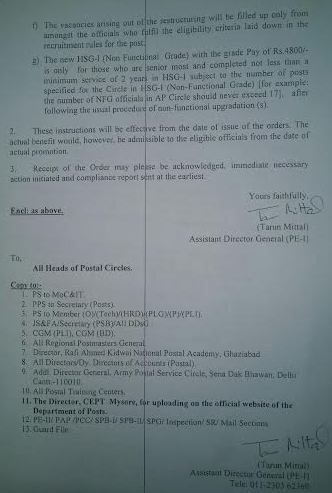 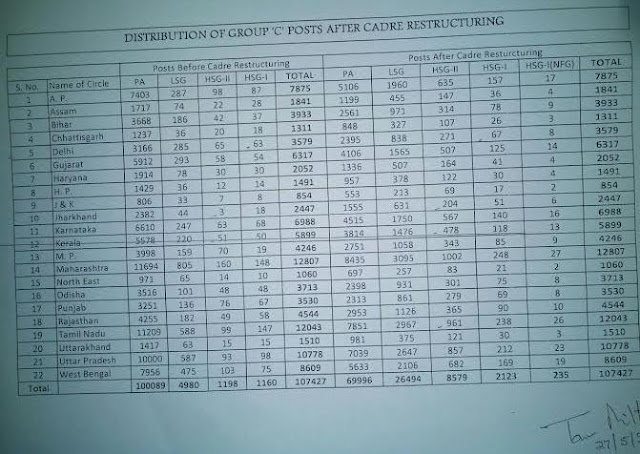