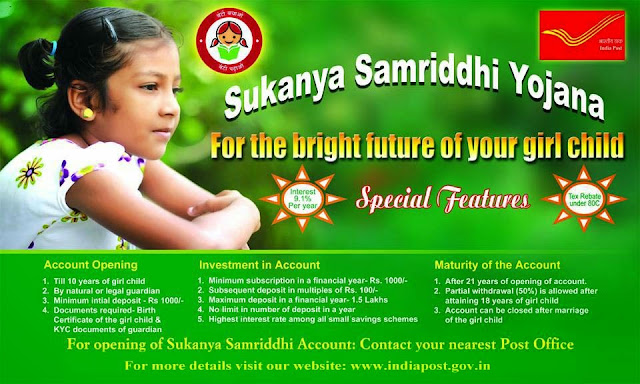 "So far, over 80,000 Sukanya Samridhi Accounts have been opened across Jammu and Kashmir but we are targetting 2.5 lakh such accounts by the end of the financial year," Prakash told reporters here at the culmination of the National Postal Week celebration.

He said the Postal department was committed and ready to provide latest technology based services to its customers and the general public in the state.

The National Postal Week is celebrated from October 9 – which is also observed as World Post Day – to October 15 every year. The World Post Day marks the anniversary of the establishment of the Universal Postal Union.

Prakash said the workforce of the Jammu and Kashmir Postal Circle will be stronger by 142 persons as they will enter services by the middle of next month after completion of joining formalities.

Computerisation of 1,450 branch post offices in the state would be completed by the end of next year, he said.

He said India Post has been serving every nook and corner of the country for the last 150 years through its vast network of over 1,55,000 post offices, which is the largest in the world.

"The Department of Posts is providing a spectrum of services which include mail, parcel and related services, money orders, post office savings bank scheme and postal life insurance among others," he said.

Prakash said services of post offices are being modernized and computerized booking of mails and track and trace service for Speed Post, registered letters, parcels and money orders have been arranged.

Electronic Money Order facility has also been provided in all the post offices, he added.

The Chief Postmaster General said the Post Office Savings Bank has been computerized and by December, all departmental post offices will have core banking services.

Computerization of rural post offices has also been started by the department and will be completed within a year, he added.