Inviting suggestions on the proposed draft Recruitment Rules to the post of Stenographer Grade-II, Grade-I, Private Secretary and Senior Private Secretary, issued by Government of Puducherry: To view  - click on - http://www.pon.nic.in/online-websites/statedepts/dpar/DPAR-stenographer-191010.pdf
Posted by AIPSA at Friday, February 15, 2013 No comments:

Request for grant of MACP benefits 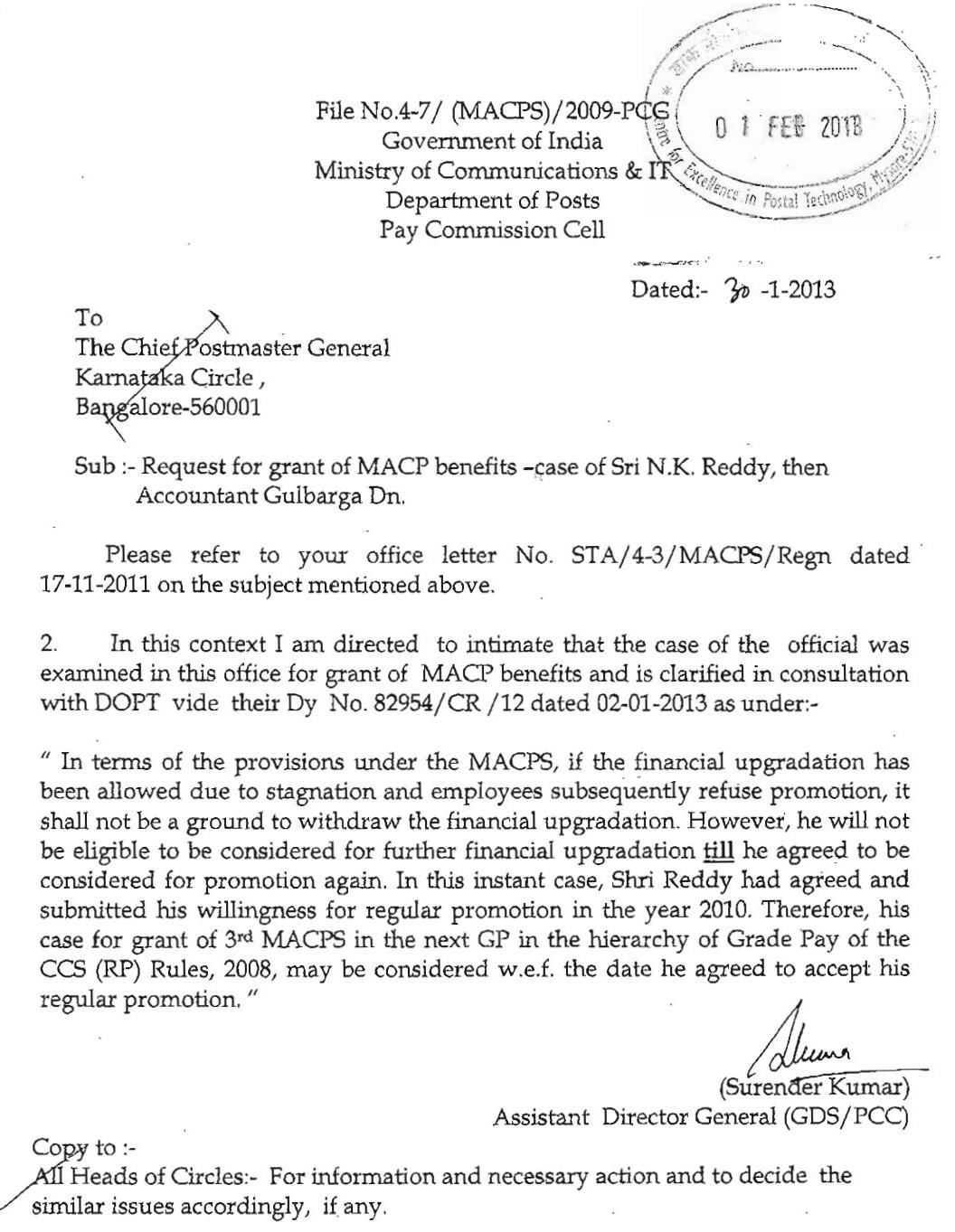 Posted by AIPSA at Wednesday, February 13, 2013 No comments:

Merger of Stenographer Grade I & II

To
The Controller General of Defence Accounts
Ulan batar Road, Palam
Delhi Cantt.-110010.
Sub: Serving of “Strike Notice”
Dear Sir,
Notice is hereby given that members of All India Defence Accounts Employees’ Association (HQ), Kolkata, an affiliated to the Confederation of Central Government Employees and Workers, will go on two day strike on 20 & 21st February, 2013.  The Charter of Demands in pursuance of which the Confederation has given notice to the Cabinet Secretary for the one day strike action is appended hereunder.


Thanking you,
Yours faithfully,
Sd/-
G. P. DUTTA
Secretary General
CHARTER OF DEMANDS
PART – I
1.      Take concrete measures to contain Price rise.
2.     Take concrete measures for linkage of employment protection with the concession / incentive package offered to the entrepreneurs.
3.     Ensure strict enforcement of all basic labour laws without any exception or exemption and stringent punitive measures for violation of labour laws.
4.     Universal social security covers for the unorganised sector workers without any restriction and creation of a National Social Security Fund with adequate resources in line with the recommendation of NCEUS and Parliamentary Standing Committee on Labour.
5.     Stoppage of disinvestment in Central and State PSUs.
6.     No Contractorisation of work permanent/perennial nature and payment of wages and benefits to the contract workers at the same rate as available to the regular workers of the industry / establishment.
7.     Amendment of Minimum Wages Act to ensure universal coverage irrespective of the schedules and fixation of statutory minimum wage at not less than Rs.10,000/-.
8.     Remove all ceilings on payment and eligibility of Bonus, Provident Fund; Increase the quantum of gratuity.
9.     Assured statutory Pension for all.
10.   Ensure Compulsory registration of trade unions within a  period of 45 days and immediate ratification of the ILO Conventions Nos.87 and 98.
PART – II
11.    Revise the wages of the Central Government employees including Gramin Dak Sewaks with effect from 1.1.2011 and every five years thereafter by setting up the 7th CPC.
12.   Merge DA with Pay for all purposes with effect from 1.1.2011 including for Gramin Dak Sevaks.
13.   Remove restriction imposed on compassionate appointments and the discrimination on such appointments between the Railway workers and other Central Government Employees.
14.   [a] Departmentalise all Gramin Dak Sevaks and grant them all benefits of regular employees; End Bonus discrimination and enhance bonus ceiling to 3500/-; Withdraw open market recruitment in Postman / MTS cadre; Revise cash handling norms; Grant full protection of TRCA; Grant Time Bound Promotion and Medical Reimbursement facility etc.
[b] Regularise the daily rated, contingent, casual workers and introduce a permanent scheme for periodical regularization. Pending regularization, provide them with pro-rata salary at 6th CPC rates.
15.   (a) Revive the functioning of the JCM. Convene the meeting of the Departmental Councils in all Ministries/Departments. Settle the anomalies raised in the National Anomaly Committee as also in the Departmental Anomaly Committees. Hold National Council meetings as specified in the JCM constitution.
(b) Remove the anomalies in the MACP Scheme.(c) Grant recognition to all Associations/Federations, which have complied with the formalities and conditions stipulated in the CCS(RSA) Rules.
16.   Fill up all vacant posts and creates posts n functional requirements.
17.   Stop downsizing outsourcing, contractorization, corporatization and privatization of Government functions.
18.   Stop Price rise; Strengthen the PDS.
19.   (a) Stop the proposal to introduce the productivity linked wage system; (b) discard the performance related pay structure; (c) introduce PLB in all Departments; (d) remove the ceiling on emoluments for bonus computation.
20.   Revise the OTA, Night duty allowance and clothing rates.
21.   Implement all arbitration awards.
22.   Make the right to strike a legal and fundamental right of the Government employees on par with the other section of the working class.
23.   Grant Five promotions to all employees as is provided for in the case of Group-A services.
24.   (a) Withdraw the PFRDA Bill. (b) Rescind the decision to allow FDI in pension sector;(c) Scrap the new contributory pension scheme (d) Extend the existing statutory defined pension scheme to all Central Govt. employees irrespective of their date of entry in Government service.
25.   Vacate all Trade Union victimisation, and more specifically in the Indian Audit and Accounts Department.
PART – III
Implement all arbitration awards including grant of higher pay scale notionally w.e.f. 01-01-1986 and effectively w.e.f. 01-01-2006.
Upgrade LDCs by re-designation them as Audit Assistants and following pay sales to different cadres –
Acctts./Audit Assistant - PB-1 with Grade Pay Rs.2400
Auditor/Steno Gr.II - PB-2 with Grade Pay Rs.4200
Sr. Auditor/Steno Gr.I - PB-2 with Grade Pay Rs.4600
SO/AAO - PB-2 with Grade Pay Rs.4800
PB-3 with Grade Pay Rs.5400
(on completion of 4 years).
Accounts Officer - PB-3 with Grade Pay Rs.6600
Sr. Accounts Officer - PB-3 with Grade Pay Rs.7600
Grant MACP on departmental hierarchy basis.
Grant one increment and Grade pay of Rs.4800 from the day of passing SAS examination.
Grant three increments on passing Departmental Confirmatory Examination.
Step up pay of Senior Promotes who exhausted ACP in the event of junior drawing more pay and getting ACP in compliance with apex court judgment.
Lady employees should be exempted from outstation transfer except volunteers.
Ensure posting at choice/home station just after completion of tenure fixed for the station.
Implement same scale for promotees and direct recruits.
Ensure promotion of clerks to the grade of Auditor after completion of five years’ service and Auditor to the grade of Sr. Auditor after completion of three years’ service respectively.
Introduce Zonal Transfer Policy up to AAO by formulating comprehensive transfer policy.
Grant higher Grade Pay for DEOs.
Grant promotion of all MTS to the grade of Clerk irrespective of academic qualification as well as age on one time measure.
Posted by AIPSA at Wednesday, February 13, 2013 No comments: