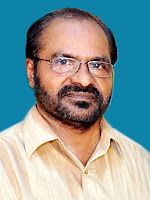 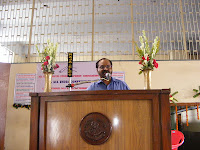 There is no need to introduce Mr.Sukumaran,  Secretary,Kerala Circle and ALL INDIA PRESIDENT of AIPSA. An unassuming and down to earth person, he is familiar to all especially in AIPSA family. An attractive and lovable character he is, the entire Postal family irrespective of rank and file liked and loved him.

Shri Sukumaran joined as Stenographer in erstwhile P&T Department in the year 1975. Initially, he was attached with DE Phones Jaipur, at the young age of 23- After 3 months he was fortunate to work under a senior ITS Officer i.e.  District Manager Telephones, Jaipur in Rajasthan circle for 2 years. During this period, he actively took part in all Department’s Cultural & Sports activities and also in social activities such as Jaipur Kerala Samajam and the likes.

Sri Sukumaran was allotted to Kerala Circle under Rule.38 and joined as Stenographer in the office of SDOT Malappuram. In the year 1978 when cadre bifurcation took place in P&T Department Shri Sukumaran  opted for Telecom wing. But being junior, he was allotted to Postal Department and consequently transferred to Office of SPOs Ottappalam. He actively associated with trade union activities. In the year 1986 he was transferred to PSD Thrissur. During this period he aggressively pursued to bring all Stenographers under one umbrella. He knew that the cadre unity among the Stenographers is utmost important to fight for their cause.It was at a time when there was no separate association for the Stenographers. He contacted  all Stenographers working in various  Postal Circles . Held numerous meetings with them in various States.  Formed Ad-hoc Committees in few selected Circles under the banner of ALL INDIA POSTAL STENOGRAPHERS ASSOCIATION. Cadre demands were compiled and distributed to all Stenographers in India. During those days there was good response from Tamil Nadu, Andhra Pradesh, Karnataka.  He arranged meetings in Chennai, Bangalore, Kochi and decided to  hold 1st AIC at Guruvayur.  I remember the full support given to his ventures by Mr. Krishnan, (Now PS to CPMG, Chennai) Mr. OSRK Murthy (PA to DPS Hyderabad- Retd) Mr.Subramaniaya (PA to APMG, Bangalore), Mr. Stansilas (PS to PMG Coimbatore- Retd), Mr. Kannan (P.A. to SSP Chennai- resigned from department). Under the banner of the Association, prompted and promoted by Sri E Sukumaran Kerala Circle filed a case in CAT Ernakulam Bench for conferring TBOP and BCR promotions to Stenographers also, in tune with the promotions of other departmental staff.

The relentless efforts put in by Sri Sukumaran started yielding results in the coming years. In the year 1995, 1st AIC held  in Guruvayur (Kerala). In that AIC only 10 Stenographers took part. The fact is that at that time even the Stenographers from Kerala Circle hesitated to join with us fearing the objections and animosity from other service unions. In the first meeting, we elected Mr. Kannan (Tamilnadu) as 1st GS and Mr. Balbeer (New Delhi) as President. Shri Sukumaran denied to accept any plum post in the association on the plea that he wanted devote his time to strengthen the organizational set up.  However, association activities were brought   in the right track, with the formation of the core committee. After that it never derailed.  By that time almost all Circles in South India formed AIPSA in their respective Circles. With the help of Mr. Ramkishan (New Delhi),Shri Sukumaran focussed his attention in North India for formation of AIPSA. He personally  contacted various Stenographers in North India. The first favourable response was received was from Maharashtra Circle, where Mr. Pillai and Smt. Claramma fought their way to form a Branch of the Association. Then it was the turn of Madhya Pradesh, where Mr. Sundresan and Smt. Jagadamma came forward to form the Association. After that S/Shri Pathak, West Bengal, Sudhakar, Chattisgarh, Chakoraborthy, Assam Circle, JJ Singh, Punjab Circle, J&K Circle followed the suite and the organizational activities  spread over all over India. In those days Shri Sukumaran was instrumental in getting recognition of the Association also. He gave necessary guidance to respective Presidents/General Secretaries. During membership verification period our Association has also submitted memorandum to Govt. and sought recognition. In the meantime Mr. Sukumaran put an idea for creating a Website for Association. Such was his creativity that in consultation with Mr. PR Nair, (Asst. Secretary, Kerala)  a Blog was created for Association within no time. It worked well. We could see hundred of viewers logging to the Blog at the initial stage. Within a short span the number of viewers crossed over lakhs in numbers.  Mr. Sukumaran was unopposed in AIPSA. Though his name was proposed for keys posts- such as All India President/ General Secretaries in various All India Conferences he humbly declined all such posts and paved way for others to come forward for union activities. It showed his humbleness. Only in the last Kolkotta AIC he accepted the post of  all India PRESIDENT, AIPSA.  However, when Mr. Kannan , First GS resigned from Department Sri.Sukumaran accepted the assignment of G.S. for a short period of time, during which AIPSA  could  first meet the Director General,  Member (P) and other senior officers in DOP in union capacity.

The fact that he was not promoted to Gazetted PS never disappointed Sri Sukumaran.  He always thought and fought for the cause of Stenographer’s cadre right from Gde.III to Sr.Private Secretary. He always prioritized subjects - such as Parity with Central Secretariat and promotions based on service length etc.  Formation of Central Govt. Stenographers’ Confederation was his cherished dream for which he extended whole-heart support and encouragement to Mr. Harisunthan, Asst. Secretary of Kerala.

Now, we have a very strong association with its root all over India, having the power and capacity to withstand any challenges in promoting the interest of the Stenographers. This was made possible by a behind the scene, unselfish and deeply committed trade unionist who is taking permanent leave from his official duties from next month onwards. However, we request Sri Sukumaran to actively continue his association with organizational activities and also to give his valuable help and guidance for its betterment in the days to come.
On behalf of AIPSA, Kerala Circle, I wish Sri Sukumaran and his family a very happy, peaceful and prosperous post retirement life.

Outcome of discussion on important issues;-


1. Special Allowance & Qualification Pay—
The demand for taking special allowance and qualification pay for fixation purposes on promotion w.e.f. 1.1.2006 is agreed to be considered and finalized within one month.

It was agreed that taking into consideration, Recruitment Rules the Senior promotee’s pay will be allowed to be fixed at the same stage (especially at the minimum of pay) thus the seniors will get the entry stage pay fixed for direct recruits.

4. Revision of Existing Allowances :-
Agreed to process the doubling the allowances (Hospital Patient Care Allowance etc.) Cabinet’s approval will be sought. Target date for finalization is one month.

5. Commutation of’ Additional Pension or Revision of Pension in respect of post 31.12.2005 retirees :-
Department of Pension to make calculation for knowing the difference of amount between pre 1.1.2006 and post 1.1.2006. Thereafter a view will be taken.

6. Commutation of Revised Pension :-
Will be examined further. Copy of Supreme Court Judgement will be given to staff Side.

7. Revision of Base Index for Dearness Allowance :-
Calculation sheet will be sent to Staff Side for comments.

9. Anomaly in the Pay Scale. Pay Band and Grade Pay — Library Information Assistant :-
will be referred to Department of Culture for comments for considering allotment of Grade Pay of Rs.4600/- in PB-2.

Secretary (Personnel) while appreciating the points raised by Stall Side has decided that a separate meeting will be held shortly (tentative date 27th July, 2012).

11. 15 Years Period fixed for Commutation is Arbitrary/unjustified :-
Official Side stated that the issue will be examined further.

12. Anomalies in the Pay Scale of Official Language Staff — Grant of parity to Rajbhasha Sahayaks :-

13. Grant of parity in the case of Indian Railways Stenographers :-

14. Eleven Additional Items given by Staff Side in the last meeting will be prioritized for further examination and discussion.

Official Side stated that Railway Ministry’s proposal will be considered and a decision given.

16. Transport Allowance at Delhi rates for employees of Faridabad, Gurgaon, Ghaziabad and Noida.

After discussion it was agreed to consider positively. Staff Side also pointed out that HRA at Delhi rates are already paid to staff and hence Transport Allowance at Delhi rates should be allowed.

Staff Side pointed out that the Field staff who were promoted after 1.1.2006 were unaware of the advantage of option as they were in the 5th CPC Pay Structure till the implementation of 6th CPC Revised Pay Structure and hence another option should be granted in such situations. After lengthy discussion, Secretary (Personnel) has agreed that there is hardship involved and assured to decide favourably.
Posted by AIPSA at Friday, July 27, 2012 1 comment:

Filing of returns for Assessment Year 2012-13

It is reported by Shri M. Harisudtan, Secretary General of Confederation of All India Central Government Stenographers Association that "A meeting of all Central Government Stenographers will be held at YMCA Mini Hall, Chittoor Road, Near Shenoy Bus Stand, Ernakulam (Kochi) Kerala State on 21st July 2012 at 11.00 am to discuss pay parity and filing case at Central Administrative Tribunal.
All are requested to attend the meeting. (Contact No. 9446010980 - M. Harisuthan)
Posted by AIPSA at Thursday, July 19, 2012 No comments: