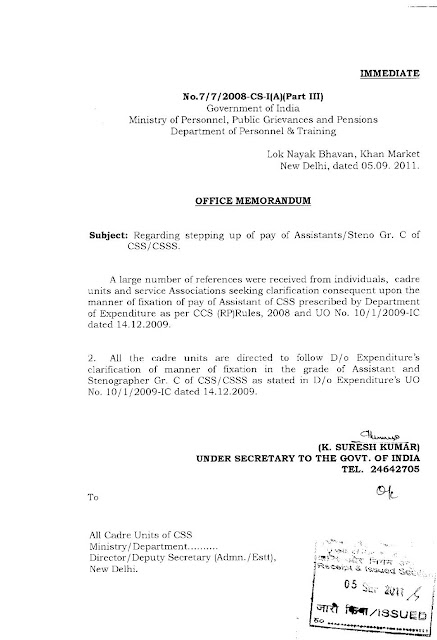 I am M.N.Raaman working as Stenographer in the office of PMG, Chennai City Region, Chennai. Well and wish to hear the same from you. I have got one long pending case of Audit objection. Please publish in our website, so that I can get the information as to who are all the beneficiaries consequent on release of DG's orders and I can also be benefitted from such information:
1. I have passed 100 w.p.m. skill test during 1995. During 1995, Rs.30/- was drasn as advance increment. It was increased to Rs.100 during Vth CPC. The same was drawn and paid at the rate of Rs.100/- per month for having passed short hand speed test up to January 2007. Due to ICIR objection, it was withheld from February 2007 and recovery of overpayment was ordered and further increments withheld. After submission of my appeal to the General Manager (Postal Accounts & Finance), Chennai – 600 008, ICIR para was withdrawn and refund of recovery was also ordered vide Lr. No.1868/CIS/AO II/3899 dt.27.11.07. Subsequently, it was ordered to draw one increment vide DG’s letter No.4-4/2008-PCC dt.04.03.2010 after arbitration award. I have been writing to my Sr. AO for drawal of one increment since then. But no fruitful result is received so far.
2. Please ascertain from our fellow members whether any member has been benefitted consequent upon issue of DG's orders and inform me, so that I can cite those case for drawal of one increment.

I hope and trust you will do needful in this regard.