Photos taken in connection with send off party/CWC meeting of AIPSA held at Thiruvananthapuram on 12.03.2011. 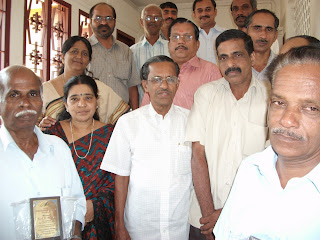 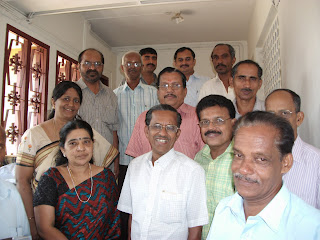 
To see the proceedings - Click on http://www.sendspace.com/file/jvxi8q
Posted by AIPSA at Thursday, March 10, 2011 4 comments:

ANONYMOUS COMMENTS WILL NOT BE PUBLISHED IN THE SITE HENCEFORTH.  SO, ALL AIPSA MEMBERS SHOULD ENSURE THAT WHILE POSTING THEIR COMMENTS, THEIR NAME IS ALSO MENTIONED.

Regarding the filing of the case, it should be understood first of all that things did not go at the pace as we wish inspite of best efforts. We are engaging very very senior and busy lawyers, who have won the case for other Departments like CAT, CPWD Stenos etc. Once, they have prepared the OA. But, we were not happy with that. And again it was prepared and scheduled to be filed on 8th February. Mr. Sinha, very unfortunately, who redrafted the OA passed away on 4th February. The redrafted OA was in his computer and now Mr. Vikram Singh is again preparing afresh. We are regularly keeping in touch with the lawyers including Mr. GD Gupta, the senior lawyer. Now, they say it will be filed in 10 days hopefully. I say there are several things beyond our control. It is much easier said than done.
You must know that our Directorate and its officers or staff are not dynamic enough to match your imagined results or expected fruits. What can you do except taking up the issues by writing to the Directorate or visit it once in six months and tapping the chambers of Officers right from Secretary to ADG? At least such an effort ever taken earlier by any one? Do you expect to stage a hunger strike before Directorate? How many of you are ready for it? I again say it is easier much said than done. All of you will please understand that we are not seated in Delhi to make Directorate swiftly react to our demands. All our requests are going into oblivion once we step out of the Directorate. Yet, we are striving hard for realization of demands. Inspite of our regular correspondence of tens of representations, we have not received even one single response from the Directorate. Some one working in Delhi should rigorously pursue with the Directorate.
Regarding DPC for PS, the DDG (P) promised. we met the Member (P) and even Secretary (P) madam also. I only appeal to all our learned members to understand our limitations. In addition to dealing with the Directorate, taking care of court case, we are finding it very difficult to coordinate all the postal stenographers for consolidating the organization. We need support, which we are getting only from few Circles. We are trying to gear up all.
Posted by AIPSA at Tuesday, March 08, 2011 6 comments:

A letter from P.Venkata Ramana, PA to PMG, Kurnool.

Please find an attachment (http://www.sendspace.com/file/snbgoh) containing a G.O. of DOPT reg. cadre review of CSSS stenographers. We have seen so many G.Os like this one in the recent past in regard to CSSS stenographers issued by DOPT. Unfortunately, DOPT forgot that they have allotted some Stenographers to field Departments and it is their duty to treat them on par with CSSS stenographers.

Everybody knows what has happened. Now, what is the way to move DOPT to think of the Stenos in the field Departments. In my view, there are some solutions which we can adopt to try for parity with CSSS stenographers. Writing to Department of Posts may not yield any result. We have to approach DOPT directly, if not, by pressurising the concerned Minister for DOPT through political means. Can we do that ? Or do you think that the much delayed Court case will bring us on par with CSSS.

Whatever we do, we have to move swiftly, because justice delayed is justice denied. Thousands of Stenographers of field offices are helplessly discussing over the step-motherly treatment of DOPT.

Let us unitedly give them a hope to live with dignity.